Laos, one of the less familiar countries makes for affordable travel. Come and explore breathtaking scenery and a peaceful culture with us.

by Astrid Wild
in Travel 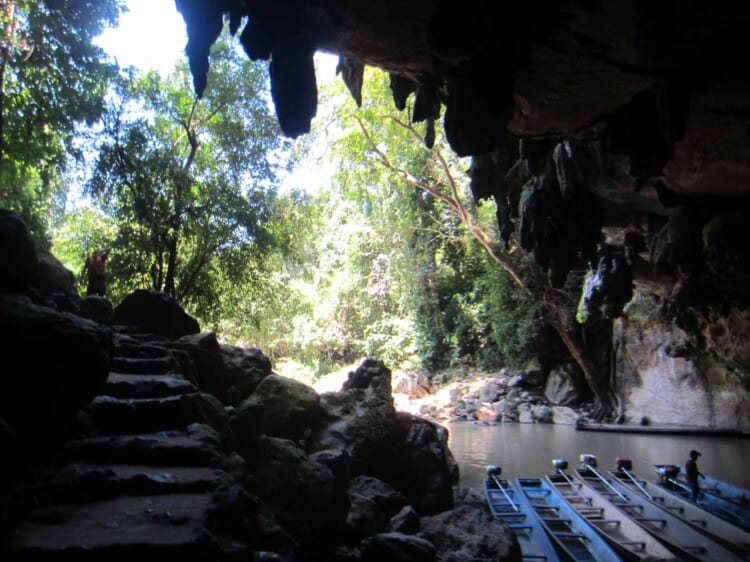 Tucked away in central Laos, where the Nam Hin Bun River cuts through the Hinboun Mountain, a 7 km long cave called Kong Lor awaits to be discovered. Part of the Phou Hin Poun National Protected Area, it’s surrounded by jungles, limestone mountains and local rice fields. Accessible only by river, it’s a destination to be explored by the adventurous.

Getting to Kong Lor Cave

I stood on the corner, suitcase by my side, watching the busy streets with tuk-tuks passing by. Young ladies were driving past, perched on their scooters holding umbrellas to keep the sun at bay whilst monks in orange robes were making their way to and from decorative temples.

I had no idea where I was. Somewhere between the south and the centre of Laos. The swirly print on the street signs didn’t provide any clue as to my current whereabouts either. Each town looked similar to the one before. Dusty roads, old French Colonial buildings and street cafes with bright plastic chairs and umbrellas and steamy rice wrapped in banana leaves.

A local bus had just dropped me off. I was on my way to the Kong Lor Cave situated somewhere in central Laos. When I bought a bus ticket that morning (at a town south from where I was) the conductor failed to mention that I would have to transfer busses. It wasn’t the first time this detail had slipped past me while travelling in South East Asia.

As I stood there waiting (for what I wasn’t exactly sure of) a young man approached holding a box filled with textbooks. Deciphering his broken English, I realised he was going to a town close to where I was heading. Appointing him as my guide, I decided to stick with him.

A few hours and two transfers later, we said our goodbyes as he got off at his destination. Box under the arm, he was on his way to a local school where he taught computer literacy.

With no one around speaking English, I continued on a bumpy road in silence. I was now on a songthaew (a modified pickup truck with benches) with my suitcase tied to the roof structure. The previous jungle landscape had now cleared to reveal rice paddies and tobacco fields. Giant limestone cliffs contrasted the flat planes of the valley resulting in a dramatic landscape.

Laos is known for its scenic nature. Its limestone karst topography results in plenty of caves, turquoise pools and impressive waterfalls waiting to be explored. It’s cleaner, less travelled and cheaper than the popular surrounding countries of Thailand, Cambodia and Vietnam, with the same kindness ever-present amongst the locals.

Farmhouses on stilts rose from the rice fields and tame water buffalo with long slim horns grazed in between. Being the last passenger, I finally got dropped off at a guest house with a big porch overlooking the farms.

Soon after arriving, a massive storm broke out disturbing the peace of the farmlands. It cleared as abruptly as it started leaving the valley glowing pink in the late afternoon sun as the flooded rice paddies reflected the sky above.

The next morning I set out to the cave with a group of travellers who arrived at the guesthouse late the previous night. They were biking through Laos and gave me a lift.

We arrived at the mouth of the cave in longboats propelled by ‘n motor. The river flowed into a gigantic cavern adorned with stalactites and all kinds of limestone formations. At parts, the river was too shallow and we had to walk on sandy banks. Only a small part of the cave was lit with colourful lights, illuminating its grandiosity. The rest of the journey was made in utter darkness except for the faint glow of our headlamps. The journey must have taken half an hour until we reached the other side of the cave.

We stopped for some refreshments and watched as a lady wove a tapestry, before heading back to where we came from. The whole experience was enthralling as I’ve never been to an underground river before.

I said farewell to my newfound travel companions, as they continued their journey south. I was to go north to see what the rest of the country had to offer.

Laos truly is a lovely country to travel in. Stick around for more stories about this serene jewel and its neighbouring countries.

Do you have any travel stories you would like to contribute to our blog? Go to the Write for Us section to learn more!

Realising I don’t have boundaries…