How I Maintain My Exercise Routine

Being active on the odd good day is fun and almost easy, but not everyday is the same. So how does one maintain an exercise routine?

by Dominique Myburgh
in Fitness 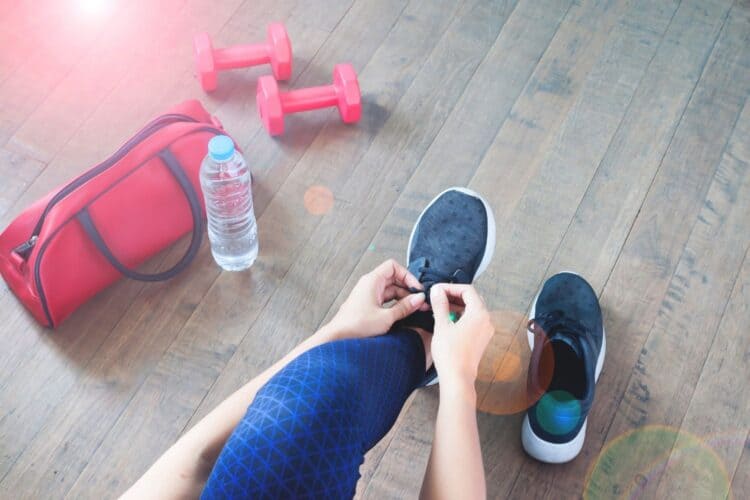 How I Maintain My Exercise Routine. Image credit: AdobeStock By SUPREEYA-ANON

We all have different methods to help us manage, and physical exertion was one of my most precious coping mechanisms. But then in my early 30’s various health issues arose and my energy levels plummeted. My entire lifestyle had to become revolved around preserving energy for healing. Later, after a fair amount of resting time, I decided to get back into exercising. Not expecting to find that it was much harder to start up again! It actually felt impossible and I didn’t know how I was going to maintain an exercise routine. Nevertheless, I persisted, and after a few months of false starts, I managed to work out one or two ways of tricking myself into following a routine that saved my mind.

Why I Needed Help

Between work and an ignored eating addiction, I stressed my body out to the maximum. Causing my entire system to malfunction. I became drained of energy making me incapable of anything that exerted too much effort, like hiking, canoeing or most of the things that fed my soul. Even playing with my dogs, who I love more than life itself, became an effort.

There were days when I would try to be active. But I found that not only was I barely capable, but I also didn’t even enjoy it anymore. I was devastated at losing my energy, but also starting to question who I was. Or who I thought I was. I knew myself as an active person and took for granted that I would always be one, even if I didn’t maintain an exercise routine. I started wondering if it was all just youth or maybe just my previously high sugar consumption. This made me sink further into depression, which in turn made me even less energetic. Just like that, I found myself stuck in a circle.

However, we are creatures of habit. Even when it comes to something that might not be good for us, like bad eating or laziness, our bodies will start to crave that thing which it is subjected to most. So after some wallowsome reminiscing and stern self-reflection, I decided that I wanted to be a healthy energetic person. I needed to figure out a way to maintain my exercise routine. Even if age and diet were going to try to hold me back!

How I Got It Right for Myself

First, I pinpointed what was preventing me from being active every time I relapsed. I tried to figure out the what and why and then change or remove that element. To a degree, I feel like I tricked my body into enjoying exercise again!

My main excuses ended up being:

So, after much trial and error, I realised that I needed something that would be:

Then I remembered one of my favourite workouts from CrossFit days, Murph. It’s hardcore, yet scalable, and very simple. Murphy traditionally consists of a run followed by 100 pull-ups, 200 push-ups, 300 squats and some more running.

Nooooo running! It’s good to get your stamina up, but increasing my heart rate while jolting my body around and struggling to breathe was not what I needed. The running makes it hard to start and comes with a list of possible excuses not to do it. Not being able to do the first exercise often led me to ditch the entire workout.

Scale it right down. Often my first wrong move was to set a goal that was too high. I would become impatient with myself and push too hard too soon, literally setting myself up for failure. To date, I have to remind myself every single day of what my body has been through and take it slow. Even if I am having a good day, I need to remind myself to keep some energy for a “rainy day”. Because I currently don’t have an endless supply of expendable energy available to my body. To get it right, I had to close my eyes and stop thinking about what I used to be able to do or what other people can do. And just think about what I feel like I could do now.

I decided to start with:

A Change of Perspective

My entire approach had to change before I could maintain an exercise routine. For example, before trying even one push-up, I would think about having been able to do 30 in a row and decide, based on that, I needed to do 15 in a row now. Never mind that after over a year of physical trauma my body could barely push itself up once. So I would get to five push-ups, become depressed from “failing” and give up. Now I set five as a goal and feel encouragingly successful on completion. Should I get to the sixth pushup on any one day then I beam with pride. The same number of push-ups but a very different end result.

I realised that to maintain the routine I could do the exercise any which way I wanted to and take as long as I needed, depending on how I felt on the day. All I needed to do in order to progress was just get on that spot and do something while counting to 10, then 20, 30 and finally 40. I had to stop comparing and just trust my own body and follow its lead. If I have down days, I still do my routine but maybe go back to doing plank again instead of a handstand for the 10 seconds. And if on any day I actually feel like doing some more, then I go for it!

A Little Bit at a Time

It has taken me many false starts, and I am still not ready to say that I am in the clear. But my 10, 20, 30, 40 routine went a long way to help me, mentally even more than physically. It would be awesome if this particular workout does it for you, but every single one of us is different. From our genetic make-ups to how the lives we have followed form us. For this reason, I have given a breakdown of how I figured it out for myself in the hopes that others can take inspiration from it and create their own routine.

Your Horoscopes, Lucky Numbers and ASTROLOGY for today, Saturday 2 October 2021

Your Horoscopes, Lucky Numbers and ASTROLOGY for today, Sunday 3 October 2021